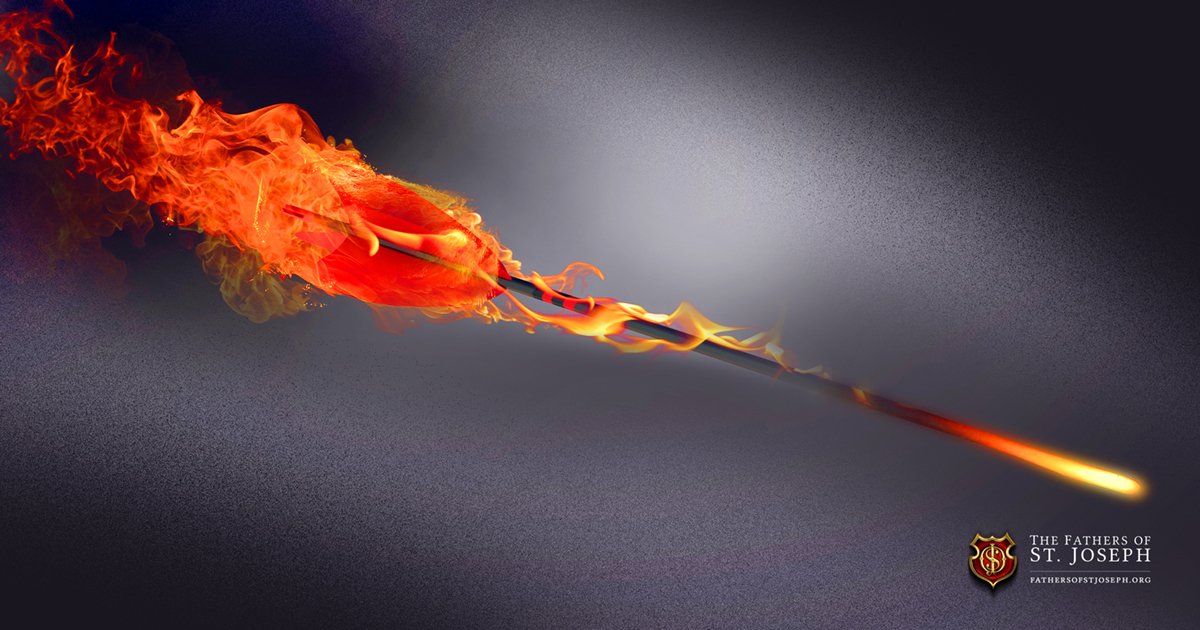 Your fatherly vocation has been divinely designed to enable you to be lifted up (your crucifixion), and by your sacrificial love draw those around you to Christ and His love (your glorification). Your exaltation demands nothing less than a resolute and enduring faith in God. Faith is more than assenting intellectually to a belief or truth. In its deepest essence, faith is trust in another person, ultimately trust in God, and the truth of His identity. Original sin attempts to abolish from our hearts trust in the Father’s love (“Original sin then attempts to abolish fatherhood”—St. John Paul II). For this reason, it is vital that “In all things take up the shield of faith, which you may be able to quench all the fiery darts of the most wicked one” (Eph 6). Again, faith is trust in God, your Father, and such trust deflects and extinguishes the fiery darts of the devil and affords you the confidence and freedom to become who you are intended to be: a manifestation and revelation of God’s glory.

The evil one assails us with six darts for the purpose of preventing us from being lifted up in sacrificial glory. Theses six darts are: doubt, discouragement, deprecation, disobedience, despair, and ultimately death. The dart of doubt instills a mistrust of God and lures us into believing that God is neglecting us; that He is distant; that He is against us; that He will not bless us as He blesses others; and that He is the source of our angst, trials, and sufferings.

When we doubt God and His fatherhood we become discouraged; we lose the courage and will to sacrifice, to battle and suffer for something transcendent and greater—such as the salvation of your wife and children—than temporary, illusive fleshly appetites and comforts. After the disease of is couragement lodges itself into our souls we will be tempted to self-deprecate, that is, to think less of ourselves rather than thinking of ourselves less. Self-deprecation manifests itself in behaviors like self-pity; measuring and comparing ourselves to others; saying things to ourselves about ourselves that are not echoing the voice of God. Such self-pity can often convince us to lift ourselves from our desperation by attempting to do something that grants us temporary self-worth. This action is usually expressed in an act of disobedience that is contrary to God’s will, such as using women to make us feel more like a man, grasping for more because we feel like we are less, pretending to be someone else because we resent the person we are.

Eventually we wake from our dazed stupor of disobedience and become dejected due to the new awareness of our sins. It is during this moment that the evil one turns on us, rubs our noses in our sinful poop, and attempts to convince us that our sins are unforgivable, for the purpose of leading us into despair. Such despair convinces us to avoid turning to God and instead remain in the depravity of ongoing continual sin. Such despair ultimately leads to the death of the soul. “Let no man, when he is tempted, say that he is tempted by God. For God is not a tempter of evils, and he tempteth no man; But every man is tempted by his own concupiscence, being drawn away and allured. Then when concupiscence hath conceived, it bringeth forth sin. But sin, when it is completed, begetteth death.” (Jas 1:13–16). In other words, the foundation of every sin is mistrust in God’s fatherhood instilled by the fiery dart of doubt, which leads to erroneous, misleading desires. But “Blessed is the man who endures trial, for when he stood the test he will receive the crown of life which God has promised to those who love him” (Jas 1:12).

St. Joseph, after discovering his wife, Mary, pregnant without his cooperation, was assailed by the fiery dart of doubt, which initially caused him to withdraw from his fatherly vocation. However, Joseph turned to God, changed his course, and reconciled himself to God and Mary. We also will do well to learn from Joseph how to overcome the dart of doubt and turn in trust to God our Father in time of trial.