The lack of toilet paper. Grocery stores’ empty shelves. Restaurants, schools, libraries, and churches on shutdown. People working from home. As COVID-19 extends its infectious tentacles to the four corners of the earth, infecting hundreds of thousands of people, the fear of death, sickness, lack of food, resources, and revenue becomes reality.

It’s a bit unsettling. I feel a bit numb as I attempt to process what is actually occurring. I’m a middle-class father of five daughters and have been married for nearly twenty-five years. Like other men, I have had moments of tremendous joy and personal success, while also enduring seasons of financial drought, joblessness, and concern as to whether I would be able to provide for my family.

As a father, my number one duty is to fulfill my 3 P’s: Protect, Provide, and be the Priest of my family. When pandemics such as COVID-19 gain potency, the false accretions of having more, being significant, leaving my mark, getting ahead financially, carving my physique, all become seen for what they really are–the worthless trinkets and meaningless achievements that world promises. The things that really matter quickly rise to the surface: Will I be able to obtain food for my wife and children? Will I be able to protect my family if people go mad? Can I maintain trust in God and lead my family in faith as the world around us crumbles?

Today is the great Solemnity of St. Joseph, Spouse of the Blessed Virgin Mary. The Church references a passage from the twelfth chapter of the Gospel of Luke for the opening antiphon of his Solemnity Mass, “Behold, a faithful and prudent steward whom the Lord set over his household.” It may not sound like much, but this passage reveals a lot about St. Joseph, and men’s role and responsibility.

In this passage, our Lord uses a very unique Greek masculine noun, oikodespotes, which is translated: “ruler of the house” or “over the household.” The fact that in all of the Scriptures only our Lord uses this word is highly significant.

Our Lord Jesus uses “oikodespotes” on twelve occasions: ten of which he refers to himself, and two others where he refers to the father of the family. Through these references, Jesus indicates the seven characteristics of the “ruler of the house.”

The “oikodespotes” receives his authority from God and is responsible to God for being the protector, provider, and the priest of his family. By fulfilling this duty, he becomes a true servant of God and his family. Such a man glorifies God and thus is glorified by God. 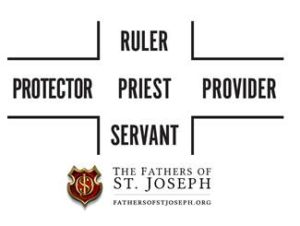 St. Joseph faced devilish fears. His wife, Mary, was the Mother of the Son of God. Would he be capable of raising Him? Would he be capable of overcoming all forms of lust and keep his vow of virginity to Mary and to God? Herod was intent on murdering the Son of God. Would Joseph be capable of saving Him and His Mother? He was commanded to flee to a foreign land. Would he find work and obtain food? Joseph was constantly at war of with the devil… and he won. This is why he is called the “Terror of Demons.” St. Joseph was the “oikodespotes” of the Holy Family, and was also proclaimed “oikodespotes” of the Church in 1870.

St. Thomas Aquinas tells us that, “Our holy patron, St. Joseph has the power to assist us in all causes, in every necessity, in every undertaking.” As you face the uncertainty of the future, the threats from the reigning worldly powers, “Go to Joseph,” and, as “Ruler of the House” of the Church, he will obtain for you the graces that you need to be a true “Ruler of your house.”