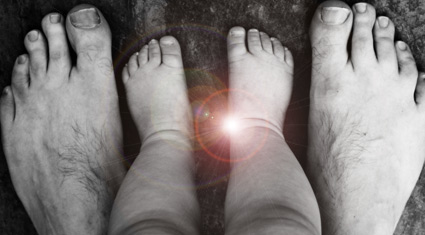 Ben’s father-in-law, an owner of a profitable corporation, offered him a prestigious position that would double his current salary. The only downside to the proposition was that Ben and his family would have to leave his rustic dream cabin, secretly tucked amidst the towering pines of the southern Californian mountains, irrevocably behind. Considering the future needs of his family, Ben believed it was his responsibility to sacrifice the cabin and take the job.

Five months after beginning his employment, the corporation lost its largest client, Ben consequently lost his job, and he and his family returned to California only to dwell in a rental he referred to as a “dump.” Once a week, Ben would torture himself and trek the winding road which led up that old mountain to the house he once called home. While recounting his loss he said, “Why is it that every time I think I’m back on my feet, God pulls the rug from underneath me?” Can we not all relate?

Back in the year 2000, my third daughter was born 28 weeks premature. Due to the nursing staff’s neglect she suffered a hypoxic event wherein sufficient oxygen was not transmitted to her brain, causing permanent brain injury, rendering her permanently disabled. Shorty after the horrific episode, I lost my job. Shortly after losing my job, I was diagnosed with malignant cancer. Just when I thought it couldn’t get any worse, a friend, desiring to fulfill my childhood dream, gave me a motorcycle. There was only one problem: I couldn’t ride it because, due to my limited height, my feet couldn’t touch the ground! Why does God allow such things? Is God against us?

I don’t think so. At the bottom of the suffering-induced madness is a deeper truth that, if embraced, can help us become fathers of glory: crises, trials and tests are where our manhood, our fatherhood is forged.

In case any clarification is necessary, God does not create suffering. Sin causes suffering. However, God is the master of appropriating suffering in such a way as to purify us—to bring about the most good—and transform us into men of strength, perseverance and virtue.

At the fundamental level of a crisis is the decisive battle to trust that God is our Father. If we fathers desire our children to trust the Father, we must become sons who trust the Father. Trust in the Father, particularly in crisis, is proof that one is a son who is capable of being a father in God the Father’s image. The success of our vocation depends upon this—everything depends upon this. Trust in the Father unlocks grace—God’s power—whereas doubt deflects grace—God’s action in our lives.

St. Joseph, after discovering Mary pregnant without his cooperation, decided to divorce Mary quietly. Joseph became intimidated by the mystery that was occurring in Mary, and feeling unworthy of this mystery, he fled from his vocation, his divine calling—from his call to greatness. Our vocation, like Joseph’s, is our path to greatness, and the evil one continually uses intimidation to drive us from this path. The evil one works tirelessly to convince us that we are inferior and inadequate. He whispers doubts and self-deprecating thoughts into our minds, until we repeat them, believe them and live from them—and, living from the lies, we are rendered useless in God’s plan. Trust in the Father is the antidote to the evils of intimidation.

Joseph responded to the evil of intimidation by entering silence, presenting his dilemma to God, trusting that the Father would come to his aid. It was in this moment of prayer that God revealed to St. Joseph his mission: “Joseph, Son of David, do not fear to take Mary thy wife.” God reminded Joseph that he was a son of David, a son of the Father, who was to fulfill the mission of being a father to God’s Son.

As with Joseph, Jesus’ mission was forged in crisis. On the night of his betrayal, Jesus entered His agony. The Greek word used for “agony” has rich significance. It can be defined as conflict or challenge, and the root word “ago” means to be led or driven. Jesus, like Joseph, was led into the battle of the soul, the battle of whether to remain and defend His Bride the Church, or to flee.

We all know how Jesus responded to His crisis: He prayed “Abba, Father, all things are possible to Thee” (Mark 14:36). Jesus trusted in His Father, and this trust enabled Him definitively to defeat sin and death.

The same temptation that faced Jesus and Joseph faces every father: whether to remain at his vocational post and defend the bride and family—or to flee. God leads those whom He loves into conflict, not to crush them, but rather to make them enduring, trusting sons who will become fathers who can lead their families to lead this world to God.

If we pray daily and enter the silence, particularly during crises, we will hear the same message given to Joseph: you are essential, vital and necessary to the redemption of the family, the renewal of the Church and the conversion of the world. God the Father needs you to father because your children need God the Father.